Hello, my name is Thomas G., I live in Medford, Oregon, I travel to the Applegate Region, Del Norte,Humbold regions quite often, mostly Applegate in the Red Buttes Wilderness, I had a confirmed sighting June 3, 2009, and have had strange occurances since 07 in this area. I'm still very emotional about with what I seen, and can describe every moment. I didn't know what was gunna become of me, because it's weird trying to anticipate what it was going to do, it was 50 yards are closer to me, I watched as it ducked behind some brush by a boulder on the hill, looking down upon me. 6-7 foot tall before ducking down behind brush, ovalish head, Reddish/Dark brown fur, I seen the sulight shining off of it's shoulders which were as big as a linebackers with full gear, amber/brown eyes, flat faced, long hair matted, and big ass eyes staring straight through me, I was crippled in fear until the adrenaline started to kick in, and I ran, and jumped down the hill which was about 8 feet above the road, ran into my car, told my friend who was with me by the river, to get into the car now, we need to go, and I didn't stop until I got home, and out of the woods. I had planned to spend the day there swimming, and fishing the Applegate River, I have to say we were only there for less than an hour, 60 miles away from my house, so it'd be a waste of gas to take that trip for only an hour, I left my house at 9:30a.m. and was back by 11:15, I admit I was speeding the whole way to my house. If it were a bear, it would of crashed off into the woods before I even would of known it was there, cuz it would of known I was there, or if it were a Mountain Lion, I probably wouldn't be typing this to you. I know what I saw, it wasn't a bear or cougar, they don't walk on their hind legs. I grew up in the Wilderness of Klamath Falls, Oregon, I've seen the animals that God has put on this planet, and this isn't anything I've seen before except on all these videos of sightings, Think of Patty, that's what I saw, I dunno if it was threatening at all, it was to me, there's been alot of unsaid sighting that happen in the Red Buttes Wilderness which extends from the Ore/Cal boarder, to hwy 96 Siskyou county, Saied Valley, Happy Camp, Indian Creek Road, Oregon Caves National Monument, and prolly 1000's of more.I read on a report that a hippy farmer from Talkemla says that he and his cohorts since they were little have been warned about the bigfoot living in this area, and that they are highly territorial,aggressive, and traveling into this area, is putting yourself in oppotunity/danger of running into one of these creatures. please contact me, nobody else will, I'm not frauding,making this shit up or anything. 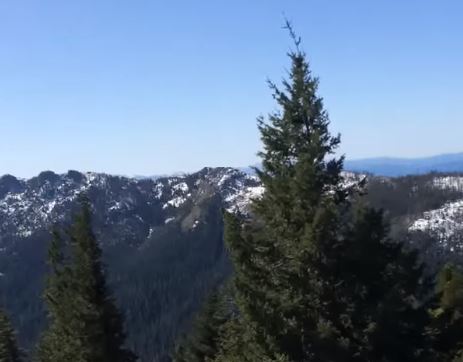 I live in the area, I've had experiences in the siskiyou also. People don't know until they have their own experience.

Other sightings near Siskiyou County, California

Family has sighting while driving along Hwy 96 near Yreka, CA

On December 3 , 2011 we were heading east on hwy 96. We live in Happy Camp Calif. We left around 6pm we were going to Redding Ca. to pick up my son from the Grey Hound Bus station We passed a few cars...

Year: 2010 Season: Spring Month: May Date: 5/12 State: California County: Siskiyou Directions to location: edited out, per request of the submitter. Observed: This trip was, in actuality, a...

I grew up in Happy Camp CA in which is a small town where Bigfoot is an icon! However, I have never believe in him. On Sunday April 18th, 2010, we saw a massive "thing" walking under Independence brid...

My name is [TH], and I have lived in an old Mining Camp, in Northern California for the past two years. During that first fall I would hear a strange whistling call that would come from a Sequoia tree...

A boy's summer encounter in a Saskatoon patch in Strathcona Island Park, next to Medicine Hat

On September 2nd 1972 we were at Strathcona Island ark which is outside Medicine Hat, Alberta. About ten of us went to swim in the river [Saskatchewan River]. In the afternoon going back to the ca...

Raccoon hunter in a corn field is knocked down by a large animal running from coon hunters.

we had been coon hunting there were 4 of us we were running 3 black&tan coon hounds. it was a full moon in the late fall of the year.we had just been running the dogs in a 40 acre section one of the l...

After all these years I'm not sure just how interesting this account will be to you however it left such a lasting impression on me I have decided to submit this report. I was born in Longview, Washin...

What was seen was a Hairy Animal on two feet running towards us on a wet rainy night...It was late one night about 3:00am... I was driving from Houston Texas from a job interview, I had been driving a...

Family has encounters with a large, hair covered creature just on the edge of Wayne National Forest

In 1979, my family and I lived on a farm in Haydenville, Ohio just outside of Logan, Ohio. My dad had just painted our front porch so we had to go out the back door to feed our dog named Wolf (he was ...

Possible sighting at a farm outside Victoria (Vancouver Island)

Hello guys: I am writing this to inform you (and to kind of hopefully eliminate some other posibilities) of some rather embarassing occurances on and around our property. When I say embarassing, it...

Motorists describe a nighttime sighting near the Manistee National Forest

Myself And my friend were leaving a venue in the country. The location is mears, mi. We were driving down this curvy rd going roughly 30 mph. It was roughly midnight. I do know the exact location. My ...

Hi Guys, I am going on over thirty sightings/encounters in northern Wisconsin. I've had as many as 4 up to my cabin at a time. Last October I was hunting when I saw a big silver big foot. he was at le...