This is an incident where I didn't actually see a Sasquatch, but experienced occurrences which I had come to know as being consistent with known Sasquatch behaviour. I was walking on a nature trail through the woods behind the Uniacke Mansion Museum which went quite far back into the bush, probably over half a mile. I had my camera taking pictures of nature as I walked along the path, feeling pretty good, at one with nature while recording her beauty on camera. The trail was laid in a large loop leading quite deep into the woods before looping around and back toward the Uniacke House. I reached the furthest loop in the trail and was on the way back around the loop when I found a tall tree stump which I decided to stop and take pictures of because it seemed like an artsy subject. I lingered here for a while just shooting pictures and enjoying the surroundings. Suddenly I heard what I could only describe as a violent swishing of small trees or tree branches back and forth ' like SWISH-SWISH, SWISH-SWISH, SWISH-SWISH! Back and forth like only a pair of hands could grab branches and do this. It was loud enough to know that it was a large animal doing it. And, of course, it couldn't have been a moose or even a bear, since bears can't actually grasp anything, and it was followed by a very loud THUMP! like something stomping the ground with great force. A strong human could have been doing the tree swishing, but not the thump. The ground in the bush was soft and too difficult for anything but a large creature to make such an impact on the ground. It startled me when it happened the first time and I couldn't figure out what it actually was or what was causing it. I peered into the trees trying to see where it was coming from and what was doing it. It seemed to be coming from about 50 or 60 feet in, but I could see nothing. The trees and bush were thick here and easily concealed whatever was causing the disturbance. After a couple of minutes it happened again ' SWISH-SWISH, SWISH-SWISH, SWISH-SWISH! THUMP! And now, I'm thinking, ''This isn't just the wind or any freak of nature occurrence! Something is definitely, deliberately doing it!'' I started getting nervous at this point and beginning to suspect a Sasquatch. I peered even more sharply trying to find the source of the disturbance. It occurred again, this time a little louder than the previous times. I decided it was time to vacate the area and broke into a fast trot out of there. I was trying to be careful because the path and the terrain was very uneven and difficult to run on. I kept moving, looking back a couple of times, though afraid to, and seeing nothing. I kept moving, noticing that I had covered quite a lot of ground, perhaps 400 to 500 yards. Translating it to 1200 to 1500 hundred feet made it clear I had covered quite a distance. Then, about 80 feet behind me I heard a very loud THUMP! like something very large jumped through the air and stomped its feet into the ground as it landed. Knowing the distance I had covered made it very obvious that, considering the distance I'd covered, this occurred RIGHT BEHIND ME! This detail made it also frighteningly obvious, THIS THING WAS AFTER ME!! I suddenly felt panic and broke into a run ' as fast as I could go on the uneven ground, terrified and afraid to look back fearing seeing the creature and getting overwhelmed with fear. I ran and ran. I listened for signs of pursuit, but heard nothing. I just kept running, for probably 10 minutes, thinking, ''How far is it to get back?!'' I lost the path at one point and really went into a panic thinking the creature could catch me while trying to find my way! I looked frantically for the red triangles marking the path. I found the right way soon after and found after following the path a short distance, I was back at the mansion! I reasoned afterward that the creature knew how close I was, though I didn't, and broke off pursuit. I never went back for a long time and when I did, I surely didn't walk the whole trail!. 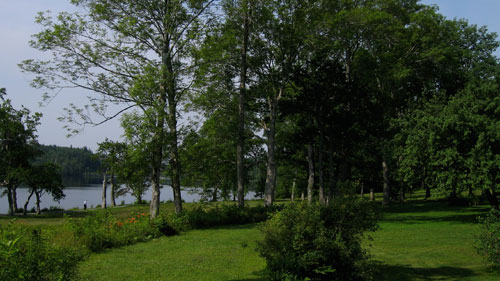 Other sightings near Nova Scotia, Canada

I was out at an old, supposed to be haunted farm house from the 1700's with my best friend at around 11 pm. We are in our early 30's. We were going to the spot by the lake where people have seen a wom...

I used to live in Suquamish, WA. during 1994-2002. My house was located at the top of center street in the middle of the suquamish tree farm. My family and I during those years of residency had seen a...

I have been hunting a large tract of private land for a little over 3 years now. It is comprised of planted pine hardwood, and cypress swamps. It is bordered on all sides by other large tracts of priv...

My family was on vacation in Colorado Springs, Co, last summer. We were driving up Pike's Peak on the main road, and turned off onto the first rest area parking lot. The region was composed of large ...

I know this is a years-old report, but.. I've only told 3 people about this, EVER. If I hadn't just read that another sighting occurred near the same area previously, I still wouldn't say anything....

Hello .The year was 2006, July. The time was eight thirty PM. We were driving back from Mt. St. Helens, Washington. It was a sunny day so we went to see the mountain that day. We were driving down the...

Sisters have nighttime sighting near Buckley.

In August of 1998, my younger sister and I were on our way back from the hospital, she was about 20 yrs. old, I was 23. It was probably around two or three A.M. when we finally hit County Line Rd. out...

Daylight sighting near rural church on Rt. 31, east of Parkersburg, near Cairo

There is a church where I attend services. We were practicing our Christmas play on the evening of November 12th 2001. It was about 8:45 p.m. when we finished practicing, when myself (age 17) and 3 ot...

Activity including a dawn sighting at a home outside Tullahoma

I was pulling out of my driveway getting ready to leave for work as I looked to the left I noticed movement on the embankment by the road. I sat watched for a little while and a very very large dark c...